Having worked with the Istituto Marchigano di Tutela Vini, a body that represents 80% of the wine exported from the beautiful Marches region of central Italy, to promote trade events in Belgium in 2010, in 2012, the focus was turned to wine consumers.

Despite its size, Belgium is a complicated market. Three areas, three different markets inside a country of 11 million. Not to mention the complication for the language. The south speaks French, the north Flemish (a version of Dutch) and Brussels, we’ll in theory the city is bilingual although in practice, there are more French ex-pats living in the city than Flemish. The most important for Italian wines is the market in Flanders thanks to the Flemish enthusiasm for all things from the Bel Paese.

In autumn of 2011, I selected a small group of influential wine bloggers, communicators and journalists for a press-trip to the Marches region to discover the homeland of one of Italy’s most loved white wines, Verdicchio. 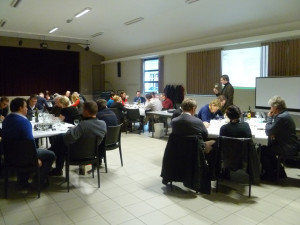 Returning to Belgium, I worked closely with a number of wine clubs to organise 10 evenings in which a wine ambassador (who had been part of the tour a few months earlier) presented the area and the region’s wines. With few of the wines available on the Belgian market, I also collaborated with a local importer in Antwerp to organise a wine tasting and sales of the wines. This meant that any of the 600 consumers that took part in the tastings had the chance to purchase the wines.

The promotion was greatly appreciated by the association of wine gilds that dedicated a special report to the wines in their magazine that is delivered to 5000 wine consumers in Belgium and I discovered areas of Belgium that I would never have normally seen. Many towns and villages have these wines clubs that host an evening every month to discover a select region or appellation or even grape variety. The clubs vary greatly between them, some being more dynamic and selecting wines of a certain calibre only for their members whereas others are happy to be exploring wines that they would normally not buy. The common theme between them though is their passion for all things vinous.

Following the promotion, a number of the wine producers participating in the project then went on to find local importers in Flanders and a number of orders were made via the importer helping producers get known in the area. The other important aspect is that with direct flights from the Marche and Belgium (thanks to low-cost airline Ryanair), many of the people we spoke to at the evenings were also planning on booking their holidays to the region and exploring the area and wineries for themselves.