On the last weekend in January, Verona becomes a buzz with Amarone even more than usual as the Consorzio Tutela Vini Valpolicella organises Anteprima Amarone, the annual presentation of the latest vintage of the Veneto’s flagship wine : this year marking the first to be bottled under the DOCG status. 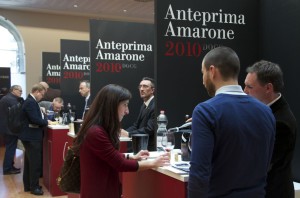 Gloriously blue skies, the first real snowfall of the year and a high profile Serie A football match were good reasons to be elsewhere that weekend, yet over a thousand wine lovers and press attended the 11th edition of the Anteprima Amarone held at the majestic Gran Guardia in the centre of Verona. The event created by the Consorzio Tutela Vini Valpolicella to “preview” the new release of Amarone. In reality, each producer crafts their flagship vino according to their own philosophy : some have already started selling their 2010 after the minimum ageing period whereas others arrive with barrel samples preferring to leave their Amarone to rest for longer. The ruling that each of the 60 exhibitors could present 2 vintages however ensured that those who prefer to age for longer than the minimum were also able to showcase the finished product.

This year’s event started with the customary opening presentations by the President, Director and Vice Director of the Consortium, the latter making a very in-depth analysis of the characteristics of the 2010 vintage. A panel of tasting experts had already analysed a number of samples heralding it an excellent vintage with Marano della Valpolicella standing out as the area that gave the best results. Well-known journalist Sebastiano Barisoni acted as moderator providing provoking comments on how producers should examine the long term consequences of their the present-day commercial strategies seemingly attacking the producers that have been caught in a downward price-swirl for this once elitist wine. He also criticized the positioning of Recioto, the deliciously sweet dessert wine, that has seen sales decrease over the past years.

The director, Olga Bussinello, proudly unveiled the new logo of the consortium. A clean modern logo incorporating the V for Valpolicella, T for tradition and territory and C for Consortium. The new-look follows the developement of activities to assist smaller wine producers with expanding on international markets and investments in eco-friendly practices.

Now wanting to forget that wine always needs to go alongside food, the organisers  provided a rich buffet to soak up the alcohol-laden Amarone. Corrado Benedetti, one of the areas most famous salumi and cheese producers laid out a selection fit for a king whilst iconic pattisier, Perbellini, provided panettone, pandoro, sbrisolona (the traditional accompaniment to Recioto) and a millefoglie to die for.